On the night of the 23rd of September, a fire started in Marakele National Park, fueled by the wind and a very dry winter season, it soon became unstoppable. 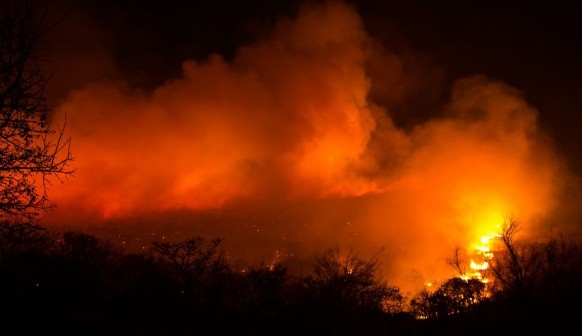 The Monday morning, word reached us that the fire had already made its way onto Welgevonden’s western side. As Michael was driving some guests down to the gate, as they were checking out, conversation still turned on the hopes that it wouldn’t turn serious and the fact that luckily it’s very far from Nedile. Little did we know….

The first calls for assistance came over the radio; the one that caught Michael’s attention was from a lodge that is quite a distance away, but in a straight line along the hillside from where Nedile is situated. Coming straight back to the lodge, Jonothan was ready to help and together they set off with fire beaters to assist where they can. When they arrived at this specific lodge the fire had already surrounded it and at some places creeping precariously closer to the walls.

Once under control they moved to the next lodge, where our other ranger, David (after having collected guests who was checking in) was already helping. The next lodge is a close neighbor of Nedile, so as they helped evacuate guests, we bought them to Nedile, calmed them down and settled them with some drinks as they waited to hear where they would be accommodated. Here the fire slowed down, and we were quite sure it would not reach us.

In all the excitement, David loaded our guests up for a game drive, which was quite exceptional as the basic element of fire played its part to rejuvenate the bushveld.

Michael and Jonothan were still working hard to ensure that our neighbor didn’t burn down, as flames came out unexpectedly from under a wooden deck. Finally the fire around the lodge was put out and it continued on along the hillside, the next lodge in line would be us…Nedile.

It is quite disconcerting to watch a wall of orange flames make its way slowly towards us, knowing there is nothing we could do to stop it. All preventative measures were in place, such as firebreaks, hoses checked regularly and staff drills done, all we could do was wait, bracing ourselves, knowing we are prepared. As the fire came over the hill, the decision was made to initiate a back burn to push the fire away from the back of the lodge, towards to front valley section. With enough volunteers, fire fighters and helpers from other lodges, people were placed on the access road to ensure the fire wouldn’t cross to the other side, putting the lodge in danger.

Controlling the uncontrollable, guests watched in amazement as the fire moved past, the whole Nedile team working together – ready with fire beaters, manning the hosepipes.

So after fighting the fire from 12pm the Monday until 6am the Tuesday, the fire was out and in other places under control and we could get some well deserved rest.