Grab your binoculars and your backpack, a great adventure waits! FabFunApps is gearing up to release its spectacular new safari app for your iPad which will take you to the heart of Africa on a quest to save the nearly extinct White Rhino! “Rescue Rangers” is a unique and creative game with a dual purpose. Not only will you get the chance to save a wide variety of colorful and amusing African creatures from dangerous and cunning poachers; you are also, playing an important part in the awareness and plight of the majestic White Rhino! The worthy organization, Save the Rhino is partnering with FabFunApps for the launch of “Rescue Rangers”.

Rescue Rangers is a playful app, brimming with colorful creatures and vibrant sound effects. The grasslands of Africa come to life in this amusing app which features many indigenous creatures that we all know and love. At the heart of the game is the lumbering White Rhino which needs to be saved from the sly and skillful poachers. Along the way, you will encounter many other wild and dangerous creatures, such as the beautiful and speedy cheetah, the curious and cheerful monkey, the massive water buffalo, the graceful and wondrous giraffe, the gentle giant elephant, and the king of the jungle himself; the regal lion!

As the comical and notorious poachers silently stalk their prey, it is your job to save the animals from a cruel fate! Test your skills on one of three challenging modes; easy, normal, or expert. Save the animals on your own or with a friend in the single or multi-player modes. Either way, this safari adventure will provide hours of entertainment!

The game developers did a wonderful job in their interpretation and design of the poachers, the creatures, and the habitat which they inhabit. The cartoon version of the huts and dwellings is accurate and the dusty, golden hues of the African planes are captured with animated brilliance! Each wild creature has been lovingly sculpted and painted with precision and their voices ring out with whimsical sound effects to bring this game to life. The many unique animations and upbeat soundtrack really immerse you into this safari adventure! 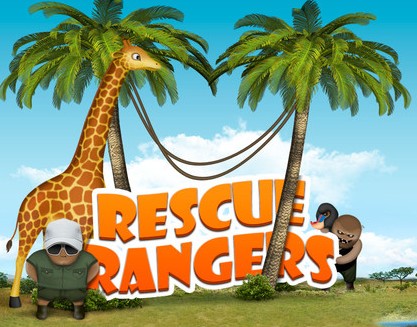 This fun and exciting game was created from pure inspiration by the app designers who took a trip to Africa and witnessed the majestic wonders of the planes and the White Rhinos, themselves! They were able to meet with a wonderful team of rangers who are committed to saving the Rhinos. This game is dedicated to them and their plight to save the wondrous creatures!